Over the past year there has been a strong effort to make West Coast Swing competitions gender neutral, meaning men can compete as followers and women can compete as leaders. This degendering of competitions has raised a lot of questions, caused many concerns, and stimulated plenty of debate about the purpose of competitions, the logistics of how we implement competitions, and even the definition of roles in the dance. To shed some more light on this subject, I’ve asked a few different leaders of the degendering movement to share their perspectives and insights here on this blog. Each week this month I will post a different guest blog, and at the end of the series I will share my own thoughts on the issue. (Be sure to read Kelly Casanova’s post and last week’s post by Kim Sifter.) 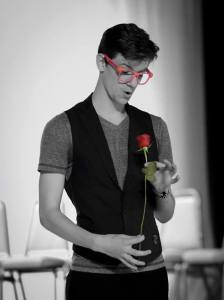 This week’s guest is Jonathyn Jackson (also known by the name of Phoenix Grey on social media). Jonathyn is a Portland-based dancer whose interest in gender-inclusive dancing began at the same time that he began dancing in 2010. When he took his first dance class, he immediately discovered that he preferred to follow, and was lucky to be in a group of peers that supported his preference. From the start, he learned both roles: following because he preferred it, and leading due to general social pressure to conform. Having grown a quick proficiency in both roles, it wasn’t long until opportunities arose that encouraged him to begin teaching by the end of 2011. Since then, Jonathyn’s been an active competitor on the West Coast Swing circuit, competing both as a leader and as a follower (wherever allowed). He recently reached All-Star as a leader and competes in Intermediate as a follower. He’s been an advocate for gender inclusivity on the competition circuit ever since he started competing, and in the past year he created the Facebook group Degendering West Coast Swing where dancers from around the world have gathered to share opinions, support awareness projects, educate each other on gender and roles as it relates to dance, and foster a community of forward-thinking dancers.

In the past few weeks, the World Swing Dance Council (WSDC) has distributed written versions of their new policy regarding validation of the points earned by competitors who dance nontraditional roles (e.g. male followers, female leaders). The new policy still has significant space to improve in my eyes, but it’s a rather positive shift from the explicit exclusion of male followers/female leaders that previous revisions of the guidelines exhibited. In the past, those who wanted to compete in a nontraditional role for their presented gender, if they were at one of the rare few events with an inclusive policy, would compete knowing that the WSDC would not even validate their efforts. Today, the WSDC will validate those efforts, but only under specific conditions:

Essentially, the WSDC does not see a difference between leading and following as skill sets, at least reflected on paper. As a result, anyone who starts in the system today, or has not yet progressed beyond Novice, is golden; they can dance a nontraditional role without penalty. The real issue, and source of the current hot-button topic, is the transition phase: now that the rules are no longer discriminating on gender lines, how do we deal with everyone who has an established record in WCS and wants to dance the other role competitively? Do they flip sides and compete in the same division, or do they start back in Novice? This is where the opinions diverge, and interestingly enough, I tend to see the split of opinion happen along the line of upper division competitors vs. lower division competitors.

The common perspective of the upper division competitors is that everyone should start fresh (in Novice) and move up on their own merit. If it truly is the case that someone with a previous record is overqualified for Novice, the system (if it were applied properly) would push them up to their proper level in no time, just as it does for any other dancer of notable talent who happens to be just starting out in Novice. That way, the dancer’s position in an upper division is earned and irrefutable through their skill in that role, not just given to them because they have a previous record in the other role. Leading and following in West Coast Swing are completely different skill sets and reflexes. An untested follower should not have a free pass nor be forced to dance in an upper division just because of his or her accomplishments in a completely different role. Most any upper level competitor pursuing the other role would actually want to start in Novice, not to “sandbag” Novice, but because they have the humility to make sure they are capable of performing the role before advancing.

Overqualified dancers placed in a low division is an issue that will fix itself naturally through the existing system (e.g. placing out or using petitions if one has the confidence to start higher). Making under-qualified dancers compete in a higher division creates a much more permanent problem. Those in question are faced with the choice to go in unprepared and incapable, thus holding back their division, or be robbed of competing in that role because their success in the previous role prevents them from competing in a more appropriate division.

The lower division competitors’ perspective is that the upper level dancers transitioning to the other role are a threat. It is perceived that everyone transitioning from an upper division, despite crossing skill sets, is innately better than any given Novice dancer. It is expected that the transition period will take a long time due to the mass of dancers who were once explicitly disallowed to compete in the other role but now have an opportunity to start fresh. Now that the floodgates have been opened, the “true Novices” will not make any placements until all the “good dancers” filter through.

This may be where I begin to catch some flak: When have “overqualified dancers” ever not been prevalent in Novice? Extraordinary dancers filter through Novice all the time. We have Ballet, Contemporary, and Hip Hop extraordinaires who start in Novice. Salsa, Ballroom, and Zouk champions start in Novice. Why? Because having an expansive vocabulary in English does not make you eloquent nor fluent in Spanish without practice. Intimate knowledge of the general grammar and linguistics that are common to most languages may give you a leg up to a degree, but by no means would you be assumed to be capable of debate in a new language straight out the gate. Similarly, just because the crossover Solo, Ballroom, etc. dancer may have great movement skills in their home turf, it doesn’t mean they have the muscle memory and reactions to effectively dance West Coast Swing competitively, and therefore they are presumed Novice until proven otherwise. Sometimes the previous experience with body awareness does aid in the learning of West Coast Swing, so they pick it up quickly and move up after proving their competency in our dance. Regardless, they still had that Novice experience and worked up the ladder.

Other “overqualified” groups include international dancers (those from non-US countries), who have dancers with adequate skill but significantly less opportunity to be rewarded for it (due to a lack of frequent nearby events, like is often available in the US), and accomplished social-only dancers, who suddenly feel the urge to compete. Both of these groups also are allowed in Novice, and also have the potential to raise the Novice bar. Where is the equivalent outrage?

My point here is twofold:

Dancers transitioning to the other role from an upper level are similar to all these groups in a way. They may have quality of movement from their previous skills (like solo or crossover champs) or lacked opportunity to present their skills (like international or social dancers) but it doesn’t guarantee that they are proficient for the upper divisions in the appropriate skills. Some are and some aren’t; it can’t be assumed. The main difference here is visibility: Ballroom and Zouk champs, international dancers – they blend in, you hardly even know they’re there unless they end up on the podium. But a man among a long line of women kinda sticks out. Familiar faces from the upper divisions stick out. And so it becomes easy to point the finger.

To use some stats to bring perspective on the “bulk” during the transition phase, here are some numbers I crunched from Boogie by the Bay this past year, as it was a major flagship in gender-inclusive J&J competitions:

So basically, out of the 13 who may be perceived as “overqualified” for Novice, only 2 proved to be a threat to placements that “belong” to “true Novice competitors.” One of those two technically got enough points to place out, right then and there, never to be in Novice again, no matter how you look at the rules. There are only so many Samanthas and Shanes and [insert well-known female leaders/male followers] in the backlog right now, and if you haven’t noticed, many of them have moved up already.

My suggestion in this transition is to re-aim the perspective: it’s not “Advanced dancers in Novice”. An Advanced-level leader is no longer Advanced as soon as they relinquish the mantle of leading. They are now most likely an “unranked follower” or a “Novice follower”, perhaps even an “Intermediate-but-doesn’t-have-enough-points-yet follower”, like so many in Novice.

Just because you see a familiar All-Star in your division’s lineup doesn’t mean they automatically have what it takes to beat you. Why admit defeat so early? Take it as a challenge. Up your game, and maybe you’ll be the one to end up on top.

This site uses Akismet to reduce spam. Learn how your comment data is processed.

Hey Minnesotans! Ease back into dancing with a couple of refresher workshops and some practice time on Sunday, July 18th.
Click here for more information!